Well today I was moved to make a card for 9-11, while trying not to read many papers this week and putting 9-11 in the back of my mind, I still "wanted" to watch the tributes.

Even though we knew no one that   perished that day, it is still very hard for me as the families that were impacted and what they are going through still to this day is totally unimaginable.    To think of just going through your daily routine to have such a tragedy impact you and your loved ones is just hard to believe.

It just seems like yesterday that we all went through this but Jillian was only 2 ~ she is now 12 and has never known not having security at the airports like we do now. I remember flying out and having my parents walk me to the gate and picking me up at the gate when I returned.

What a different world we live in today.  I so remember that day ~ see the story at the end of this post if you would like to read it.
Now on to my card, which has a couple of wet spots from tears! 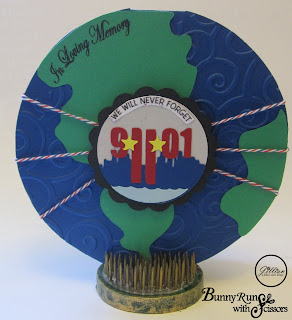 I used the Peace on Earth Christmas card base from SVG Cuts as the base of my card because this event affected the world!  I then took Divine Twine in Airmail as if to wrap around the world as there were 115 different nationalities among the casualties.  Then I used the Friday freebie from My Scrap Chick as the centerpiece of the card.  The stamp "In Loving Memory" is from Let Freedom Ring by A Jillian Vance Design.

May God Bless America and the World, today and always.
Blessings,
Bunny

Please leave a comment, I love to hear from you!

Where I was when the World Stopped Turning:
My daughter was just 2 at the time, I remember getting up and just coming
downstairs as the first plane had hit. My mom who always has the morning
news on called to tell us to turn on the TV and that a plane had hit the
WTC. I stupidly said "how could they not see it?" Not even thinking it was
an attack but an accident. As I turned on the TV, they were showing the
tower that was smoking, then while still on the phone, the second plane hit,
we both just broke into tears, not imagining what was happening. Being a
Tuesday I am not sure why I wasn't working but most of the day Jillian and I
just sat on the sofa watching and crying, she was too young to understand
really what was happening but she knew it was tragic. I remember seeing the
Today show with Matt and Katie with the Pentagon in the background, and then
seeing smoke rising when they had no idea what had just happened and
watching that unfold was just unbelievable too.

It is funny to think she has always known this type of security that we have
now, I remember flying out places where my parents walked me to the gate
after never having a security check point. Just so sad. Our family had
decided in early 2001 we would all take a cruise, my parents and hubby,
daughter and I. We planned and also had it all paid for, we were to leave
September 9, 2001. My father who you can talk into anything, in about May
said, "you know you guys go without me, I am not going." He said he
couldn't tell us why but also said, I do not want to be away from home at
that time, he said just doesn't feel right. So we got a total refund and
spent it on a Rainbow Play System for our back yard which is still a hit
today 10 years later when Jillian's friends come over to play and swim.
Well when September 9th came we of course gave Dad a bad time of we could be
going on a cruise and such, then when all this happened on 9/11, we thanked
God for giving Dad intuition to keep us home and safe. Had we gone on that
cruise, we would have not been able to fly home for almost a week after plus
wouldn't have really know what was going on I remember them saying that
cruise ships could have been targets also. Just so sad to think about all
those that lost the innocent lives. May God bless the families who lost,
the heroes who gave their lives and the ones suffering from helping. The
USA will never be the same.

My daughter watched a video this whole week at school of real audio of that
day and reenactments of the events on Discovery Channel, when she would tell
me in the car on the way home about it, I would just started crying. Not
sure how Sunday will be for me, as I did not personally know anyone who was
lost that day but it still affects us all.