Special Dad Mini Album
Well Father's Day will soon be upon us so I wanted to get a head start!
I did a Mini Chipboard Album and Card.
It is a L O N G post so grab your favorite beverage and a cookie and lets get started! 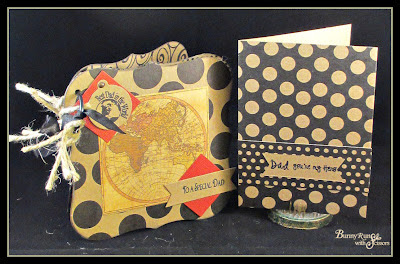 Well Father's Day will soon be upon us so I wanted to get a head start!
I did a Mini Chipboard Album and Card for my hubby, Jillian's dad who is the best DAD and HUBBY in the universe!
Lets start with the card ~ as you can tell I lost my mojo after the album! But also wanted a simple card that was also on the masculine side.

Now for my Album ~ I normally don't do them and this may be my first official one!!!
I used all Canvas Corp papers!  I used the Spellbinders Grand Labels 1 set for shape of the album. 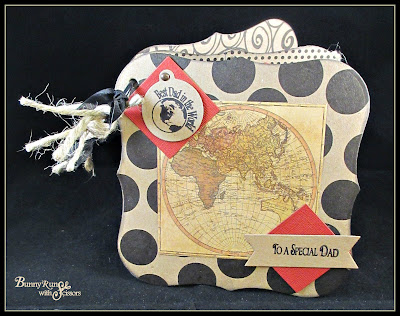 This photo shows the cover of the album using the {die}lightfully Charming Circle Die Set,
{die}licious Flag die and Spellbinders Square Nested die set too for the squares.
Ok I lied, the center World Map paper is 7 Gypsies which is owned by Canvas Corp! 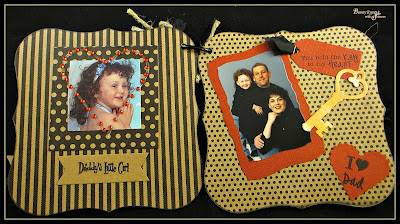 This is the second and third page.  That is Jillian when she was 4! Love that photo and look at those curls!  She lost them at about 6 so hoping they come back at some point like my curls did!
Again  used the {die}licious Flag die and Want 2 Scrap Nestabling Scalloped Hearts in Red.
On the third page I used Spellbinders Labels 8 for the photo and mat, the Scalloped Heart die and also Julianna Hudgen's Jewel Keys Die set for the key.  AJVD {die}verse Tag die with a sentiment from Sending My Love stamp set and the I <3 Dad from Celebrate Dad stamp set.
This photo was taken when Jill was 3 1/2 years old. 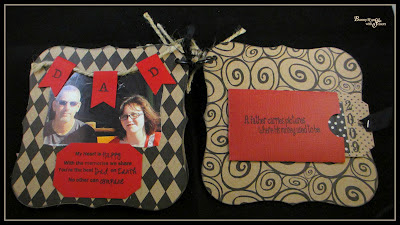 The fourth and fifth pages hold more recent photos!
On the fourth page is a photo from Disneyland January 2012 when we were there for CHA
We took this photo of them in that same spot in 2005 so it was fun to compare the two.
I used Canvas Corp Jute Rope for my banner and AJVD {die}licious Flag dies.  I stamped D A D from the Type Star Alphabet set ~ which I love because it is the perfect size for our flags ~ just worked out that way ~ not planned!
Then the sentiment is on our Emerald Cut {die}mond die cut.
For the fifth page see below. 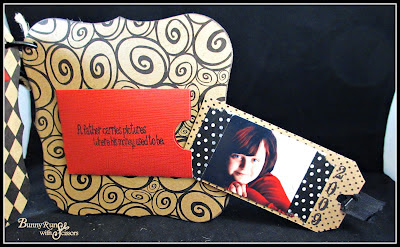 For the fifth page i used the {die}signer Pocket to hold the sentiment and a tag that holds Jillian's photo that is a favorite of family and friends from 2009.  It was also the photo that Creative Retailer chose to feature in the Spring issue!  I also chose the numbers from Type Star Alphabet for the year.  The polka dot tape is Smash Book Tape!  and the polka dot background on the tag is our Tiny Dots background Stamp.
I used 7 Gypsies black ring and tied the Canvas Corp Jute and AJVD Rinkle Ribbon around the ring!
Thanks for sticking with me for this extra long post! I had a blast making this and see more mini albums in my future!