Hello, everyone! Happy Wednesday!
Since we didn't have a Tuesday Night Live last night due to a hockey game, I decided to do a video featuring this card! The game was Hockey Fights Cancer night, which is near and dear to our hearts because we've lost many to that horrible disease.
And, since the Fall and Winter Coffee Lovers Blog Hop is still going on, I wanted to do a fun, quick card for you guys! I created a short video to show you how I put this together.
The main coffee blog is here: http://coffeelovingcardmakers.com/20650 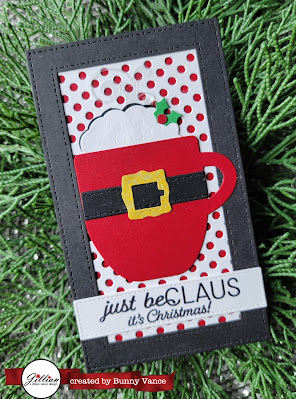 I started with the Mini Slim Backdrop cut out of red cardstock. I added the Signature A2 Polka Dot Cover Plate cut to 3 and 1/2 in wide, then layered the black Mini Slim Frame over that to cover those cut edges. It was clever for Jillian to design it that way so that you can use A2 sized cover plates for Mini Slim cards!
Then I cut the mug from the Hug in a Mug Die Set, which I use a lot. I thought I need some whipped cream and decided Santa's beard was perfect for that. so I cut Santa out and cut off the beard, turned it upside down and now we have whipped topping! After the video I decided it needed a little bit of a shadow, so I added a black shadow after the video was complete. I cut the steam out of acetate, which is from the Cozy Cup Die Set. The cute little Holly is from Sam E. Snowman, and there's also a similar die in Santa and Friends.
I used a Sentiment Strip for the belt and the buckle from the Witch Hat Shaker Die Set. The sentiment is from Just BeClaus and stamped on a So Many Stitched Sentiment Strips die cut.
Such a fun and quick card! 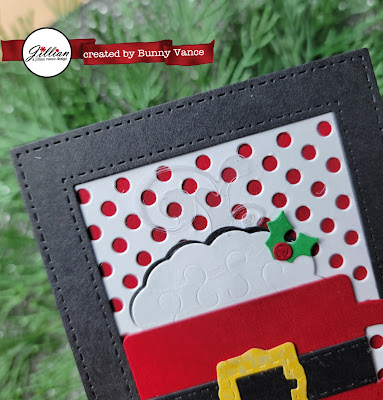 Here is my video, enjoy!
Have a blessed rest of the week!